The myriad drugs for my health (or lack thereof, she said ironically), depression and the MS itself are giving me a true run for the money, and causing frustration for me in terms of writing.

No, let me be straight. It's mild cognitive decline. I'm more easily upset, less inspired, less interested in doing and more convinced that I can't. I forget things. My head hurts. But as you can see, I haven't been robbed of words. I still move quite well, but inside my head, things are changing. I'm not me, and I hate it.

Okay, I'm still me, but I feel the changes. And they threaten me.

Probably going to start posting the first book chapters of Rising Wolf at my website. Hope that will somehow help me to finish. It's become a THING, to finish. It's a symbol. I failed deadlines, failed to deliver, failed readers, but if I can finish then ultimately I might continue on trying to do more of the same. Actually produce something. Let Mal and Zach out to play instead of just living inside my head.

I've written things, but fan fiction. Shorter Id fic.  It's helped remind me I'm still capable, but right now I'm in a bad place. And a novel at this juncture was a mistake. It's a different animal, and I'm floundering a bit. The radio silence from my end hasn't helped, either, so I have decided to break it.

Well, this was a happy post. The next one will be better. I hope everyone is doing well.

Posted by Theda Black/Klaudia Bara at 7:44 AM 4 comments:

now in paperback! Beneath the Neon Moon

Beneath the Neon Moon, 2nd edition, in print!
(for $6.29 and free shipping with Amazon Prime) 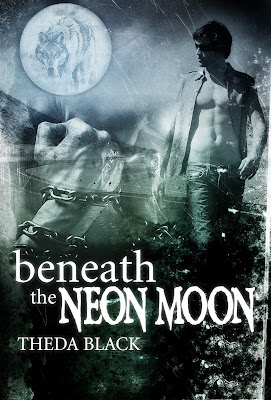 
Posted by Theda Black/Klaudia Bara at 8:03 AM No comments:

such a simple thing

Rising Wolf has taken me so very long to publish. Like a lot of you, I've been through seemingly unending upheavals in terms of my personal life, finances, health. It's been overwhelming. Along with other health issues, then the MS diagnosis and trying to find a course of treatment that slows the progress, next came depression - something I've got a bit of familiarity with.

I'm on Rebif, three shots a week, and methotrexate once a week. I can't say they make me feel well but I've noticed, finally, an uptick in energy and the ability to complete some tasks, along with less brain fog. So now is the time to get my book done, right?

Susanna's Pacemaker is a very simple app - you plug in the words you think the project needs (okay so I'm terrible at estimating, but I plugged in that Book II needs the same number of words as Book I), the date you'd like to be finished, if you'd like weekends off, if you'd like a steady flow of words, and it spits out a chart. So I did that. And I've been following it, because it lets me see what I need to do to get this book out, plain and simple. And it's more difficult than I ever would have thought, but still, I'm hanging in.

RW is a bonafide novel, and I'm looking at a 160,000 word estimate (I did say I'm terrible at estimating word count, but seems reasonable). I have 107,000 words as of now. If I do get finished in August per my plan, I could FINALLY have a release in the fall. Oh my god, am I hoping for that.

Maybe, quite possibly there's nobody out there to read it after my extended off-time with no new releases. I really hope that's not true, but this thing has become bigger than that, even. For me it's a symbol: never say die, never give up. And, oh yes, these characters deserve to have their story told.

So yeah, a biggie for me.

I hope everyone is doing well.
Posted by Theda Black/Klaudia Bara at 7:20 AM No comments:

So much for embracing nature, even from my wide, breezy porch. I sit down to write and a spider crawls up my side. DO NOT WANT.
Try again. Sit on the porch itself, turn around and see my cat after a lizard without a tail. Oh, wait, without a tail NOW - there's the tail, wiggling on the porch. I'm guarding the lizard while two dogs and a cat try to get to it.
The dog picks the wriggling tail up in its mouth, takes it off the porch. She's back in less than a minute, and ugh, we know where THAT went. She noses interestedly around me. Cat still trying to get past me. I build a barricade because I cannot bring myself to pick up the tailless lizard (it might, oh, WRIGGLE. Or wiggle, like a tailless thing. Or a severed tail).
Yeah, maybe I'll try this another day.

Posted by Theda Black/Klaudia Bara at 12:57 AM No comments: